A little over a month ago, the 25th Heidelberg Historic took place. Unfortunately, the weather for this year’s race was not very good. Apparently, Saint Peter did not care that Germany’s most renown rally would celebrate its 25th anniversary that day. However, this did not stop the drivers from participating. Some rebels even came with an open top – or without a top at all.
Is it a coincidence that this special rally takes place here in the Electoral Palatine? After all, it is the birth place of the automobile. We talked to Kuno Hug, the “Father of Heidelberg Historic” and board member of the promotional association of the Technik Museum Sinsheim, about the challenges involved in organising a rally, about Austin-Healey 3000 and Walter Röhrl. 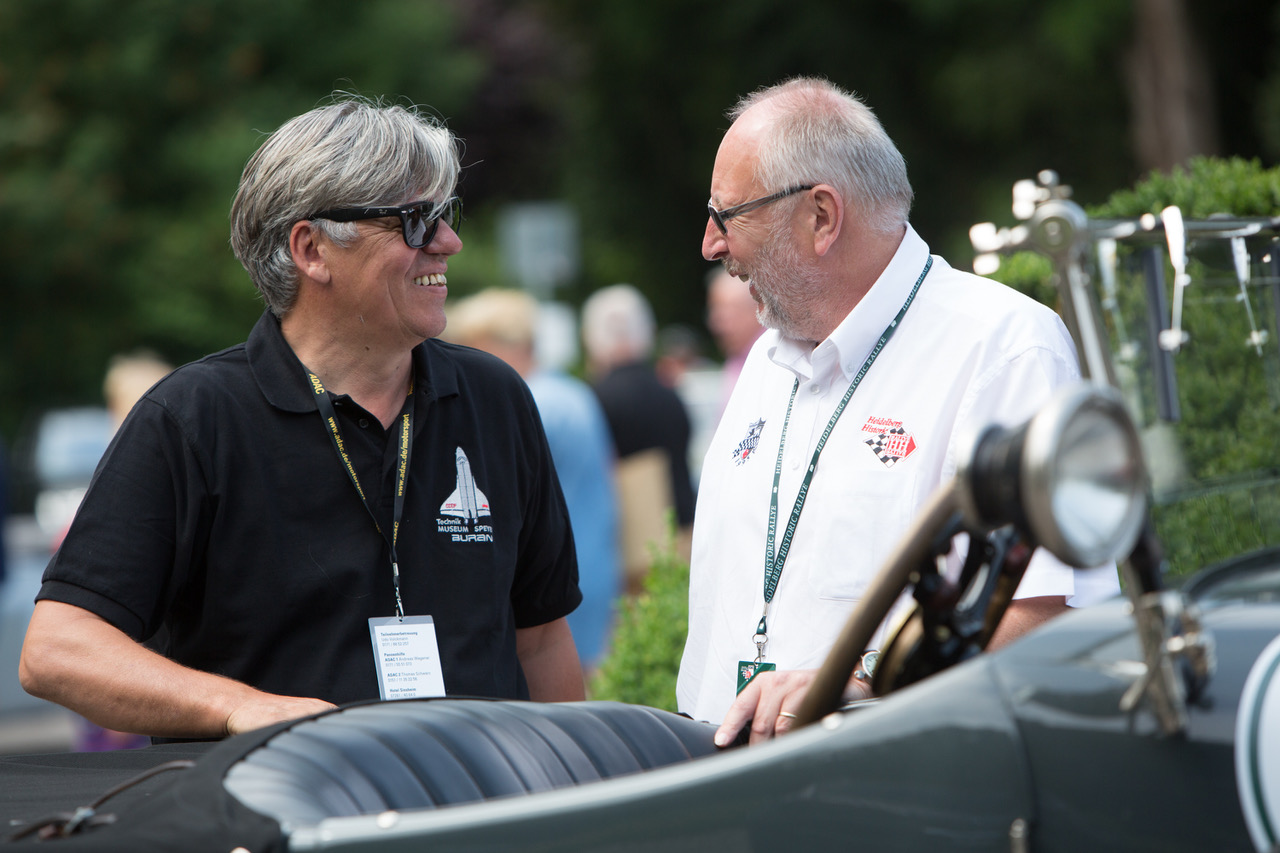 Museum: Tell us a little about yourself – Where does your passion for vintage cars come from?
Kuno Hug: I grew up with the puffing noises of a typical 4-stroke engine. It is not like in any other story where someone has their own vintage car at 18 or took over the vehicle fleet from their father. It was a lot less spectacular. When I was a little child, I already spent a lot of time in the company-owned vehicle of my grandmother’s laundry service: an Opel P4 from 1936. However, it hadn’t clicked yet. That took place later and it was Hollywood-like. There was this one girl in our street in Handschußheim (district of Heidelberg). She was beautiful and completely beyond me and my friends’ reach. Not because she already had a boyfriend, a US-American – back then, every young woman fancied the GIs who were stationed in the surrounding barracks. No, it was because he did not just have any car but THE car: an Austin-Healey 3000 from 1965. How could we have ever competed with that? As far as I was concerned, that was the moment when it clicked. I had completely forgotten the girl, I was thunderstruck. Since then, I couldn’t get vintage cars out of my head any more – I spent every spare minute with these fascinating vehicles and with motorsports.

Museum: So, this beauty was your first big automotive love?
KH: Yes, I couldn’t get it out of my head any more. And, according to the principle “an old flame never dies”, in 1994, I bought an Austin-Healey 3000 from 1965. Being the organiser of a vintage car rally, I obviously had to have an appropriate vehicle. 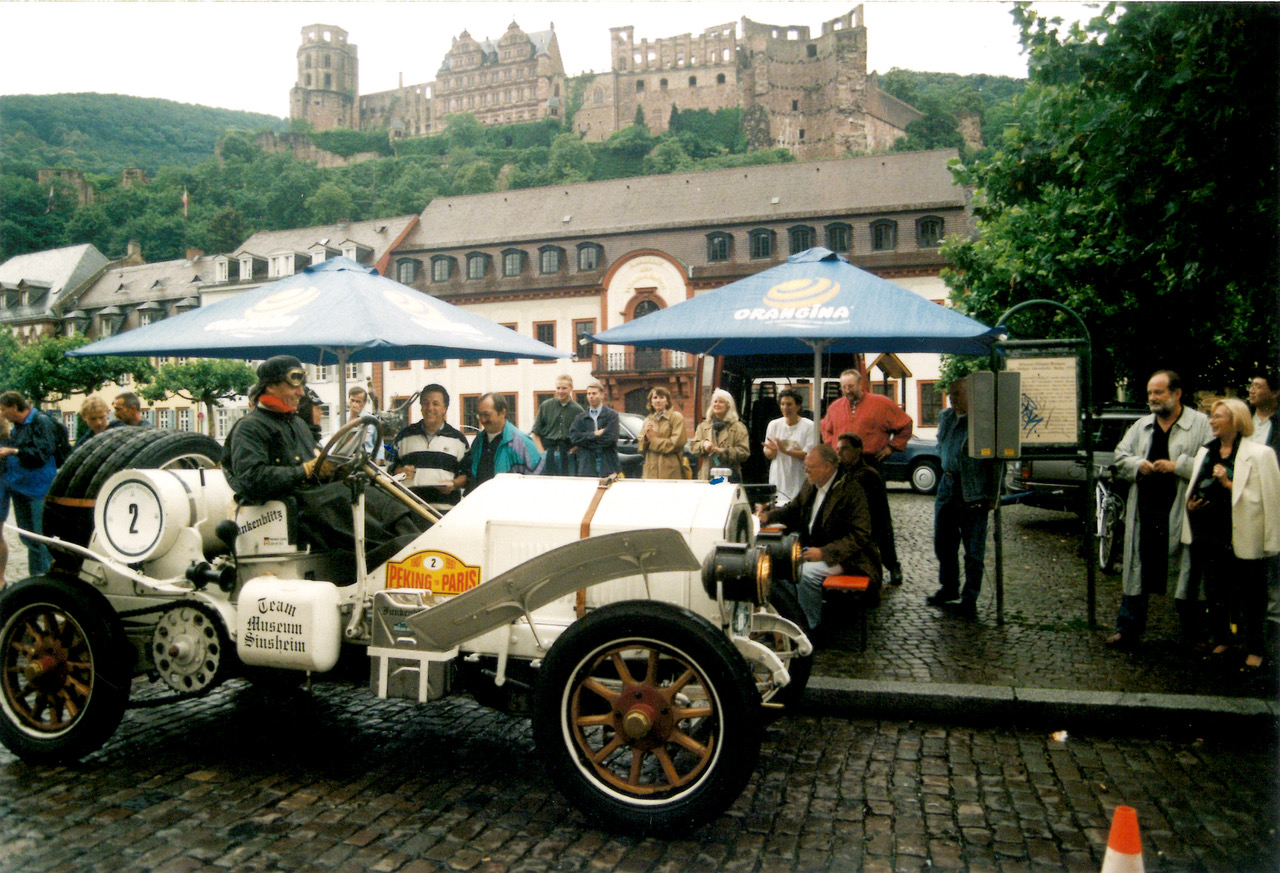 Museum: The renown Heidelberg Historic is celebrating its 25th anniversary this year. Being the “Father of Heidelberg Historic”, I am sure that you can still remember the beginnings of the rally, right?
KH: It all started in the 70s. My first car was a Fiat 850, not an Austin-Healey, but still quite old. I joined the Motorsportclub Ziegelhausen e.V. in the General German Automobile Club (ADAC), first as a representative, later I became sports director. In the 80s, we celebrated huge successes with the rally “Schloss Heidelberg” (Heidelberg Castle). In that rally, we still had new vehicles participating. In 1984, when Audi wanted to test its new all-wheel drive “Sport Quattro” in the rally, “Schloss Heidelberg” was known to everyone. Having the World Champions Walter Röhrl and Christian Geistdörfer driving the Audi was the cherry on the cake. We were drowning in applications. The rally was not regionally limited anymore. The following years, however, were a little rougher. It was not as easy as it used to be to organise a rally. For environmental reasons, we had to obtain more and more authorisations and comply with more and more requirements which forced us to discontinue the “Schloss Heidelberg”. By that time, I came to the decision to organise a new rally – it was supposed to exclusively involve vintage cars. In the meantime, I had become a board member of the ADAC Nordbaden and was responsible for the motorsports department as of 1994. I was supported by my friend Hermann Layher, former director and today’s president of the museum. He has petrol running through his veins just like me and as we all know, birds of a feather flock together. This led to the first “Nordbaden Classics” in 1995 – it started in front of the spectacular setting of the Technik Museum Sinsheim. Since the rally was continuously gaining more recognition, in 1998, the City of Heidelberg authorised us to pass the historic old town. That’s how the “Nordbaden Classics” became the “Heidelberg Historic”. 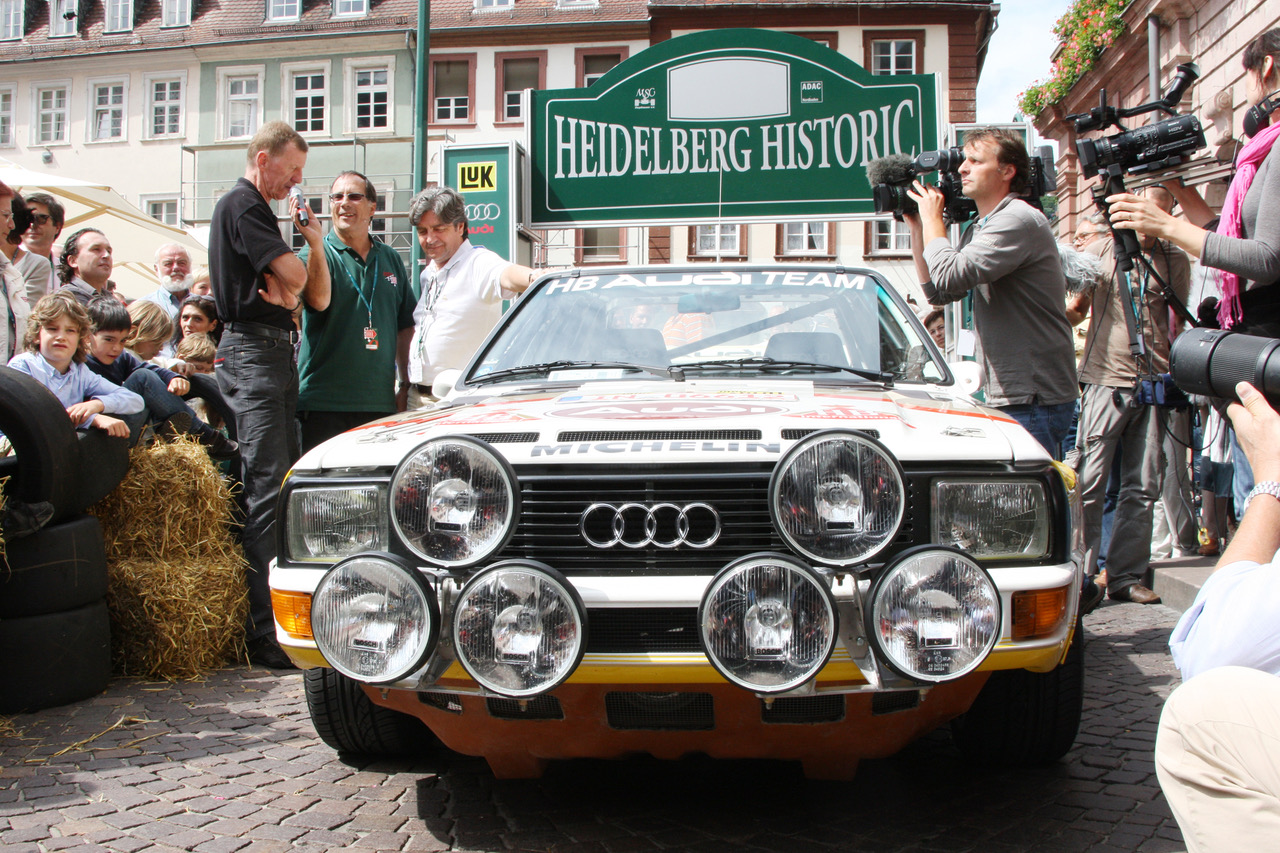 Museum: Have you participated in any of the rallies?
KH: I tried at least, but pretty soon, it became clear that I am a lot better at organising such events than sitting behind a wheel. For the sake of my wife, I concentrated completely on the organisation and let others do the driving.

Museum: How would you describe the HH in three words?
KH: Three words are far from enough. Enjoying the route, a passion for old cars, a sporty challenge, demonstrations of automotive history, respect and sublimity for the engineering achievement.

Museum: How does the HH take place?
KH: The drivers have to cover a distance of 600 kilometres in two days and pass 16 regularity tests.

Museum: What criteria have to be met by a participant/vintage car?
KH: The participant has to own a valid driving licence and the car has to be constructed in 1976 or earlier.

Museum: What is so special about the Heidelberg Historic – what are its particularities or how does it differ from other rallies?
KH: Our region is known to be the birthplace of automotive history. Carl Benz invented the first car here, his wife completed the first ride and thanks to her, we had the first petrol station ever here in Wiesloch; we also have the oldest garage worldwide in Ladenburg – those are all amazing places to visit. The start and finish line are at the Technik Museum Sinsheim, which has a very comprehensive collection of vintage cars of all classes and eras. You were also the only museum worldwide to get hold of the two supersonic jets Concorde and Tupolev that can now be found on the museum’s roof. The route of the rally leads through the hilly landscape of Kraichgau, the “Tuscany of Germany” ... we like to hear that down here. The well-deserved lunch break takes place in Heidelberg. Being a native from Heidelberg, even after all these years, I am still excited and overwhelmed to see these splendid beauties standing in the historic old town.

Museum: How do the preparations proceed?
KH: After the rally is always before the rally. After the summer holidays, we started with the search for sponsors, the organisation of the route and the roadbook. We had to sort out the finances as well. Additionally, we had to organise the 300 volunteers, from the fire brigade to timekeepers to track marshals. But most of all, we had to make sure that all the volunteering clubs got something in return in the end – that was also a very important part for us. Organising a rally requires a lot of experience and strong nerves: in stressful situations, you have to keep a cool head, react appropriately and make compromises. The most important thing, however, is to be excellent at handling different characters. In 2015, I handed over most of the organisation to the ADAC. Now, I only take care of the sponsors. What I liked most in all those years was being in contact with all these people and that’s why I kept this part of the organisation. 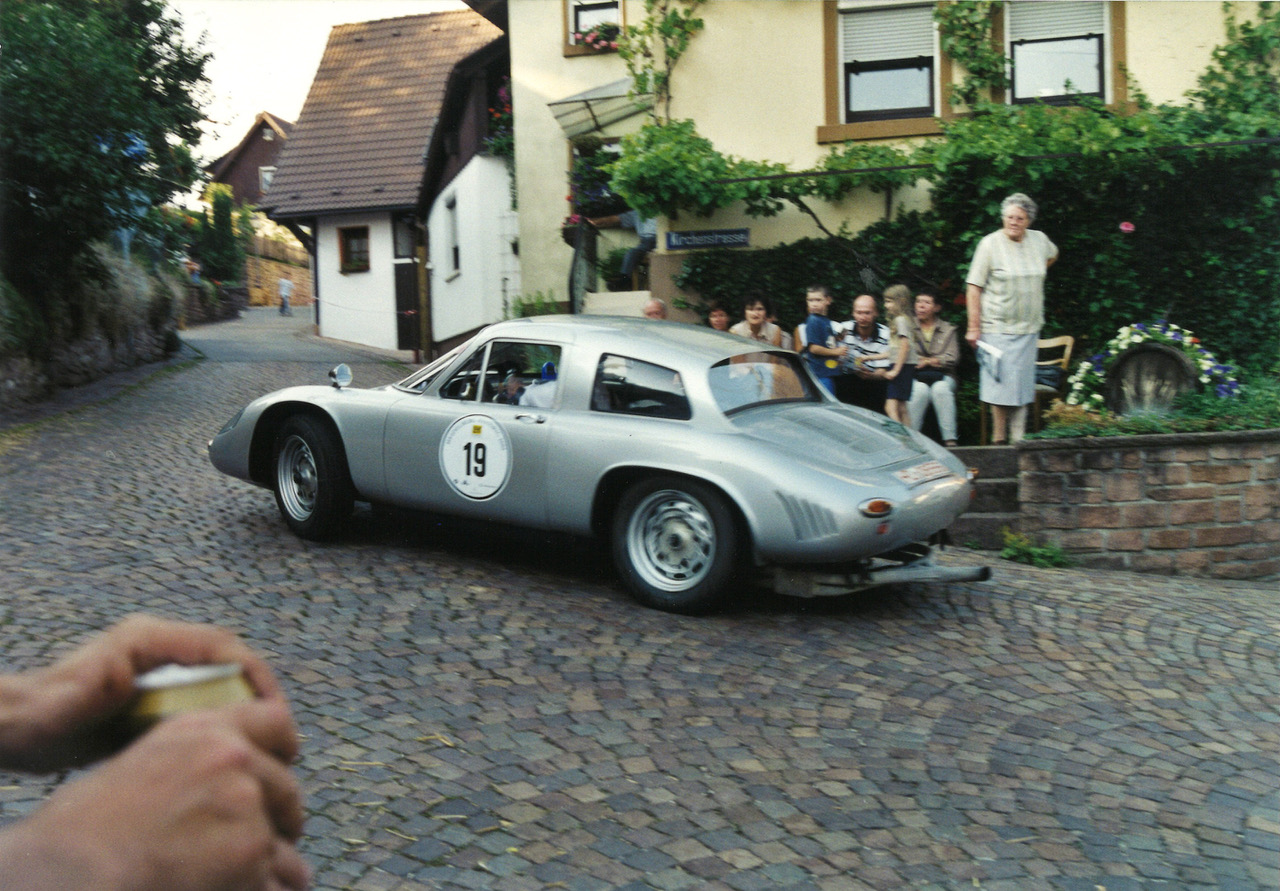 Museum: You have taken part in the rally for so many years now – what are the events that you remember the most? Which event do you like to think back to?
KH: There have been so many exceptional events in the course of 25 years. One thing that touches me again and again is the passionate participation of the legendary village Spechbach. Since 2002, Spechbach takes part in the Heidelberg Historic and every time they turn the passage of the village into a very special event. This is only possible thanks to the very enthusiastic citizens of Spechbach. The charitable association called “Nachsitzer” takes care of the catering for the visitors. The profit is then donated to Spechbach’s primary school.
Four years ago, I remember a rather sad event – an accident. A scooter driver crashed into an NSU Prinz. In Zweiflingen close to Öhringen, she drove into a restricted road. The poor woman suffered from multiple arm fractures. However, for her, the bigger tragedy was that she as a vintage car fan had damaged a car like that.
The most beautiful event by far was when, in 2009, Walter Röhrl took part in the Heidelberg Historic again. He drove an Audi Sport Quattro like in 1994, when he first participated in the “Schloss Heidelberg”.

Museum: What do you think, why are people so fascinated by vintage cars?
KH: The elderly usually associate their youth with the vintage cars, either they used to have a car like that in their family or they associate good memories with it. For young people, these old cars are so fascinating because sometimes, they haven’t seen a car like that before or they are fascinated by their adventurous technical features.

About the myth surrounding Alfa Romeo

“The Rustiest Hobby in the World” during the Corona Crisis

200 years ago: How electricity created movement ...

On the Road in Tuscany with an MG PA