50 years ago, on August 1st, 1971, the 3.34-billion-year-old moonstone with the number 15499.67 was knocked off of a rock at the Dune crater during the Apollo 15 mission. After its arrival on Earth, it stayed at the NASA Lunar Receiving Laboratory (LRL) at Johnson Space Center in Houston, Texas, for 42 years. Today, visitors of Europe’s biggest exhibition on crewed spaceflight “Apollo and Beyond” are fascinated by the stone. It is showcased in perfect lighting and surrounded by nitrogen and safety glass. It is thanks to Gerhard Daum, director and curator of “Apollo and Beyond”, that NASA gave this valuable basalt stone from the Earth’s satellite to the museum as a permanent exhibit.  In the following interview, Mr. Daum tells us the “Story of the Moonstone”...

Mr. Daum, when and how did moonstone number 15499.67 come from the Moon to Earth?
The stone came to Earth in the course of the Apollo 15 mission. On August 1st, 1971, the second day on the Moon for astronauts David Scott and James Irwin, they went on an expedition with their LRV (Lunar Roving Vehicle). The fourth stop during their second excursion (EVA = Extra Vehicular Activity) was the Dune crater. There, David Scott found a basalt rock and knocked a stone off of it. The stone then travelled back to Earth with all the other rock and ground samples taken during the Apollo 15 mission. It then spent 42 years at the NASA Lunar Receiving Laboratory at the Lyndon B. Johnson Space Center (JSC) in Houston.

... until it became a permanent exhibit at the space exhibition “Apollo and Beyond” at Technik Museum Speyer. How did you manage to get a hold of it?
Given my role as a journalist and as director as well as curator of the space exhibition “Apollo and Beyond”, I spent time in the US in May 2011 in the course of the Space Shuttle mission STS-134. My first stop was the John F. Kennedy Space Center (KSC) in Florida, where I attended the launch of the “Endeavour”. Afterwards, I flew to Houston in order to participate in the respective briefings and press conferences at the JSC. After one of the press conferences, I accidentally ran into Louis Parker. He is responsible for Travelling Exhibits at the NASA Public Affairs Office, i. e. Apollo moonstones and other items for exhibition purposes, and we already knew each other.

Let me just ask: How did you know Louis Parker?
As a spaceflight expert, I have been working in the field as a journalist for quite some time, and I attended a total of 55 launches of Space Shuttle missions and was on site at the KSC and JSC during the respective missions. Not only have I accumulated a vast knowledge about spaceflight, I have also met a lot of NASA employees and astronauts throughout my time as a journalist. Some wonderful friendships have developed over the years. I first met Louis Parker in the 1990s.  I was glad to meet him again and we started talking. When I told him about my exhibition “Apollo and Beyond” at Technik Museum Speyer, he listened to me carefully and said: “Gerhard, you need a moonstone as a permanent exhibit.” Shortly after, he sent me an email with about 40 guidelines that you have to comply with in order to acquire a permanent exhibit of theirs.

Were those conditions hard to meet?
The guidelines were demanding, but Technik Museum Speyer had a lot to offer in return. About 800,000 visitors per year, solid safety conditions, and all of that in the centre of Europe... In addition, the required scientific relevance was obviously given in my space exhibition “Apollo and Beyond”, especially because I was already planning the exhibition area “The Moon” back then, including a replica of the moonscape with a lunar module, lunar rover, and spacesuits.

How did the story continue?
I personally handed in all the required documents at NASA in Houston in March 2012. Two months later, Carlton C. Allen, Astromaterials Curator at the JSC in Houston, came to visit me. He wanted to see the “Apollo and Beyond” exhibition himself, and take a glimpse of the exhibition area “The Moon” that was still in the making at the time. Eventually, he seemed quite pleased with what we had accomplished so far. The tension kept growing by the day...

... but then, you received the good news?
Yes. At the end of August 2012, I got an email from the JSC. “Congratulations”, it said. They explained that we had been “approved” to receive a moonstone from the Apollo 15 mission as a permanent exhibit. Which one was still to be decided. In the end, we received moonstone number 15499.67. We were “over the moon”. I was very happy about those news, too, but I was mainly astonished by the fact that a sentient human being had knocked off this 3.34-billion-year-old stone from a rock that is still clearly visible on the Moon today... 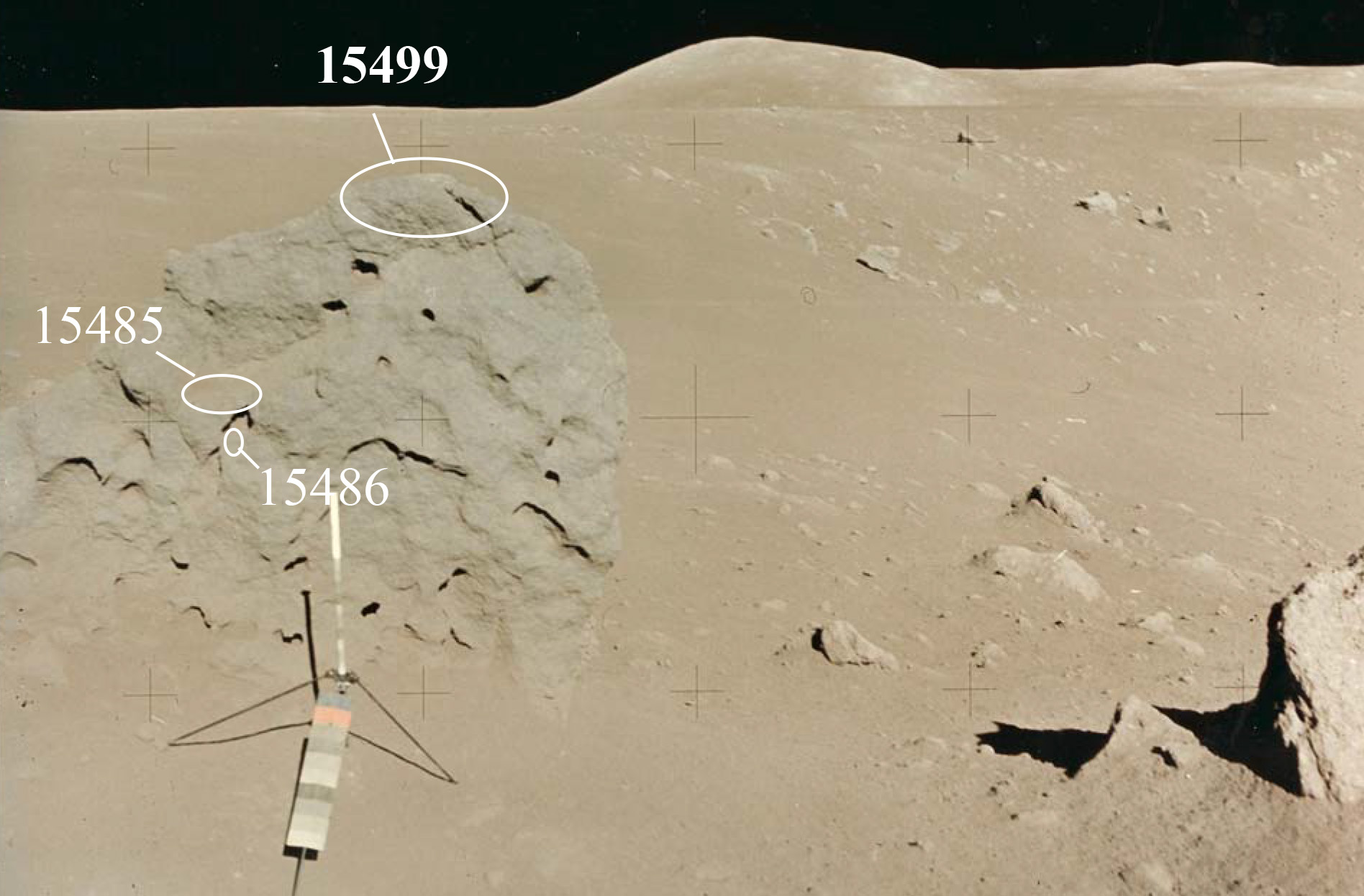 After receiving the good news, the exhibit had to be shipped across the Atlantic Ocean. How do you transport a moonstone from Houston to Speyer?
That was my very own personal mission. I travelled to Houston and Carlton C. Allen handed the stone to me in a glass container on May 6th, 2013, at the Lunar Receiving Laboratory. Inside the glass container, the stone is surrounded by nitrogen. Since its arrival on Earth, the stone has never been in contact with oxygen.  I then transported the stone to Germany as a carry-on in a 30-cm plastic suitcase.

A moonstone as a carry-on – how do you explain that to the safety staff at the airport?
In general, you are not allowed to move a “lunar rock” from A to B without permission. Back then, NASA gave me a document explaining to the safety authorities, the airline, and customs, that I had permission to carry the moonstone with me. In turn, I was obligated never to leave the moonstone out of my sight. At the luggage check, the suitcase was not allowed to pass the scanner. When I opened it for the safety staff, they were amazed. One of them said: “I will never get as close to a moonstone ever again.” She had followed the Apollo mission at the time.

How did you feel when you sat on the plane to Germany with the moonstone in your suitcase?
It was rather surreal. As a boy, I had always followed the space missions, especially the Apollo missions, with curiosity and passion. And now, many years later, I was allowed to travel from Houston to Frankfurt with an Apollo moonstone from NASA in my carry-on... I was impressed and grateful about life's paths and just how much you can achieve if you always act with passion.

For Technik Museum Speyer, the arrival of the moonstone was a big event.
Yes, it was. On June 2nd, 2013, moonstone number 15499.67 was welcomed into the “Apollo and Beyond” exhibition. For the welcome ceremony, a “moonwalker” had made his way to the museum: Eugene Cernan, commander of the Apollo 17 mission and the eleventh human who has ever set foot on the moon, received the moonstone from me and then handed it over to Hermann Layher, the President of the museum. We seized the opportunity to also celebrate the inauguration of our new exhibition area “The Moon” that had been finalised in the meantime.

It was the perfect setting for the moonstone.
Exactly. We recreated a moonscape, including a replica of the Apollo 11 lunar module as well as a replica of the “Lunar Roving Vehicle” that was used for the first time during the Apollo 15 mission. Additionally, we recreated the Apollo 17 spacesuits of Eugene Cernan and Harrison Schmitt. And last but not least: Behind the moonscape, we mounted a large, artistic, 30-metre-wide, 18-metre-high photo wall, made up of 12 photos as a visual continuation. It includes the Hadley–Apennine and the Dune crater showing the rock from which David Scott knocked off the basalt stone on August 1st, 1971.

And where did you place the moonstone within that elaborate setting?
The moonstone can be found in a glass cabinet at the very front of the moonscape. If visitors are standing right in front of it, they will have an overall view of the stone, the moonscape and the photo wall.

A true highlight of Europe’s biggest exhibition on crewed spaceflight.
50 years ago, the stone travelled from the Moon to Earth. Now, it tells its 3.34-billion-year-old story to the visitors of our museum.

Mr. Daum, thank you very much for your time!